To share your memory on the wall of Doreen Rowe, sign in using one of the following options:

Passed away peacefully after a brief illness at Louise Marshall Hospital on Friday, September 27, 2019. Loving wife of the late Harold (2006) and mother of Garry and Barbara Rowe, Carol and Lorne Riddell and Greg and Kelly Rowe. Proud grandmother of Donald and Stacey Rowe, Theresa and Brad Baker, Janette and Ed Terpstra, Denise and Dan MacIver, Andrew and Andrea Riddell, Kati Riddell, Connor Rowe and Monica, and Meghan Rowe. Great grandmother to Justina and Brandon McTaggart, Bailey, Shelby, Carter, Abby, Avery, Jared, Jordon, Ruby, Jase, Colt, Brodie and Amelia. Great great grandmother to Brezden McTaggart. Survived by brother Mac Stringer, sister-in-law’s Edna Leeson, and Carole Stringer. Predeceased by her father Gordon (1961), her mother Stella (2010), her brother Ralph (1999), granddaughter Lori (2010) and brother-in-law Glen Leeson (2013)
Cremation has taken place. A Celebration of Life will be held at the Dundalk Legion, 109 Proton Street, Dundalk on Friday, October 4, 2019 from 3 – 5 p.m. with words of remembrance at 4 p.m. In lieu of flowers, donations to Highpoint Community School Snack Program or the charity of your choice would be appreciated.
Read Less

Receive notifications about information and event scheduling for Doreen

We encourage you to share your most beloved memories of Doreen here, so that the family and other loved ones can always see it. You can upload cherished photographs, or share your favorite stories, and can even comment on those shared by others. 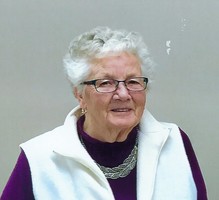